NASA's Parker Solar Probe is completing final preparations before embarking on its almost seven-year journey to study the Sun's atmosphere. Decades in the making, the probe was designed and manufactured by the Johns Hopkins Applied Physics Laboratory in Laurel, Maryland. It was originally known as the Solar Probe Plus before being renamed in 2017 by NASA to honor physicist Dr. Eugene Parker.

Recent technological innovations will help the spacecraft approach the Sun closer than any other spacecraft in human history. Parker Solar Probe (PSP) will come within about 3.8 million miles of the Sun, breaking the record of the Helios-B spacecraft which achieved a closest approach of only about 26 million miles in 1976.

The probe's primary mission is to help scientists better understand the Sun's atmosphere and its electromagnetic processes. Although we generally think of the Sun only as our source of daily heat and light, it is actually a complex system which puzzles scientists even today. For example, the Sun's outer atmosphere, called the corona, is hundreds of times hotter than the Sun's outer shell, the photosphere. Generally, one would expect the opposite to be true.

Additionally, heliophysicists do not fully understand the processes around so-called Coronal Mass Ejections (CME), when the Sun ejects particles out into space at extremely high speeds. Through a process called magnetic reconnection, these particles can travel long distances to other bodies in the Solar System, including Earth. Although it can commonly produce beautiful auroras near Earth's poles, in some cases solar activity can have a damaging impact on Earth.

Previously recorded solar storms like the Carrington Event in 1859 and the March 1989 geomagnetic storm have shown that if strong enough, these CMEs can eject particles which eventually interact with and disrupt our electrical and communications infrastructure. Although many theories have been proposed over the past several decades – including some by Dr. Parker – scientists still aren't quite sure why or how this activity happens.

Currently, scientists can observe and forecast solar activity using a fleet of spacecraft including STEREO-A, SDO, IRIS and SOHO, but all of these spacecraft are roughly as far away as Earth is to the Sun. Parker Solar Probe will give scientists the opportunity to go directly to where the action is, instead of viewing it from afar. 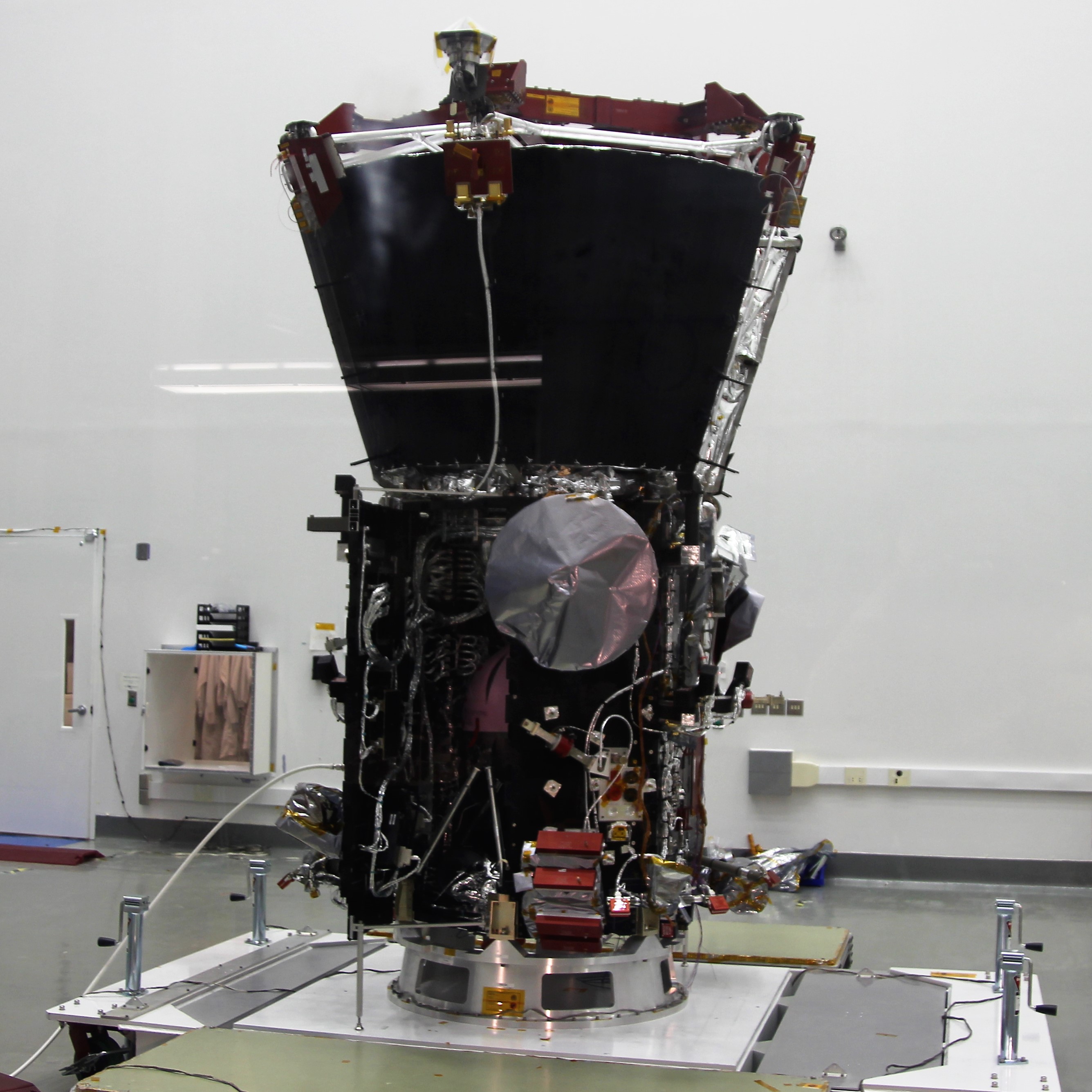 On-board PSP are four major instrument sets which are designed to: directly measure the electromagnetic fields on the Sun (Fields Experiment), observe charged particles as they are accelerated in the Sun’s atmosphere (IS☉IS), take images of the Sun’s atmosphere (WISPR), and measure the properties of the particles of the solar wind (SWEAP). These investigations will greatly increase our ability to understand and forecast solar activity.

Because the spacecraft will be so close to the Sun, unique technical challenges had to be overcome when designing the probe. Thermal protection being of critical importance, the spacecraft is equipped with a revolutionary heatshield, composed of a carbon-carbon composite similar to that which was found on the Space Shuttle. The heatshield, 4.5 inches thick with an 8-foot diameter, will protect the probe’s sensitive components from the extreme temperatures near the Sun. On the Sun side of the heatshield temperatures will reach around 2,500 degrees Fahrenheit, while the other side remains around room temperature.

PSP will also employ an advanced Guidance, Navigation and Control (GNC) System to ensure it remains on the correct trajectory and in the right orientation throughout flight. If the thermal protection system (TPS) does not always face towards the Sun, the probe's instruments could be destroyed. However, since the planned trajectory will result in communications that will always be either delayed (due to the distance away from Earth) or completely impossible (when the probe goes behind the Sun), quick correction of the spacecraft’s trajectory and orientation by mission managers back on Earth will not be possible. The GNC system will utilize star trackers and Sun sensors combined with a propulsion system to maintain the correct course and attitude. If sunlight is ever detected where it shouldn't be, the spacecraft can quickly make a correction to its orientation without human intervention.

Following launch this summer, the probe will spend the following 6 years and 11 months on a complex trajectory utilizing flybys of the planet Venus for gravity assists to bring its orbit closer and closer to the Sun. After its seventh and final Venus flyby, PSP will be in a stable orbit around the Sun and although the mission is only planned for a 7-year timeframe, the spacecraft will remain healthy for as long as fuel is available to keep it in the right orientation. It is possible that the probe will be healthy and active for years after its planned mission.

As teams are nearing completion of preparations prior to launch, on April 2, 2018 they shipped the probe from NASA's Goddard Space Flight Center in Greenbelt, Maryland to Titusville, Florida where it will continue its testing and ultimately complete its final assembly.

The Parker Solar Probe will continue its journey to the Sun when it is launched by United Launch Alliance's Delta IV Heavy rocket from Cape Canaveral, Florida. Launch is currently scheduled to take place within a 20-day window starting on July 31, 2018.

Be sure to keep up-to-date with all the latest information about the launch of Parker Solar Probe on RocketLaunch.Live.